Frequently referred to as Hollywood North, Vancouver is swimming with actors! Many of whom like to ink up, and many who are curious about the effects or possible repercussions. So let’s explore.

Should Actors get tattoos? It seems like a fair question. On the one hand, it’s YOUR body, so you should be able to do with it what you want. On the other hand, if you want to use YOUR body as a storytelling mechanism, shouldn’t it be more of a blank canvas ready to be moulded, dressed, and re-shaped for each story and role?

Our first point of view comes from Terry Chen, a Taiwanese / Chinese actor known for ‘Ben Fong Torres’ in the Cameron Crowe film Almost Famous (2000). Since then, you can catch Terry in many Film and TV roles including House of Cards, Continuum and Van Helsing. Here is what he had to say:

How old were you when you got your first tattoo? What and where is it?

“Got my first tattoo at 21. Two of them actually. A Haida crescent moon in the sun. And my Chinese family name under my Chinese zodiac sign the tiger. Both on my right bicep.”

Have your tattoos helped or hindered your career?

“I don’t know. At certain times I think they’ve helped and other times maybe not so appropriate. Really depends on what roles I’m auditioning for.”

Was there ever a time you thought, “Maybe I shouldn’t get any more tattoos because of my acting career?”

“When I was younger my agent asked me when I was going to stop getting tattoos, because it would pigeonhole me. I said Johnny Depp has a sh** ton of tats and he’s versatile. She promptly responded, “You’re not Johnny Depp.” How true. That made me pause for a few minutes, but I have relentlessly collected more over the last 15 years.”

Have you gotten release forms from each artist that has tattooed you?

“Yes I have release forms from all artists. Never had trouble getting them. Have also had most of them tell me I don’t need release forms. Once the tattoo is paid for and on my body, I own them. Period. The release forms are just for productions to protect themselves because of the Mike Tyson face tattoo debacle.”

Terry makes a good point. His tattoos are a part of who he his and what he brings to each role. As far as pigeonholing goes, that really depends on how productions see you and decide where you would fit in the story.

Thank goodness I had the chance to reach out to Maureen Webb. Maureen has been a Casting Director for over 25 years and seen her fair share of actors, so I knew her opinions would be helpful!

Once you find out an actor has a tattoo, does that affect how you bring them in for roles?

“Generally it doesn’t affect my decision to bring someone in, unless it’s a face or large neck tattoo. It depends on the size of the role, the size and visibility of the tattoo and whether tattoos fit the role. If it’s a smaller role, and the character definitely couldn’t have tattoos, I know it would take time and money to cover those tattoos, so it could affect a producer’s decision. If the actor is in demand, we don’t usually care if they have tattoos. I’m guessing the makeup department might have a different response.”

Ever had a production specifically request to NOT bring in actors that are tattooed?

Has a tattoo ever been the deciding factor in a casting decision?

“Yes. Both for and against.”

What advice would you have for actors who are thinking of getting tattooed?

“Personally, I love tattoos. I have a couple myself. As an actor, they can be covered if necessary, and often are! But, the truth is, if they’re visible, they are noticed and discussed by directors, producers and casting. It could possibly affect the roles you get – for instance a period piece. If you’re an actor just starting out, I would suggest doing some research, about how any visible physical modification choices might impact your career, and limit the roles you may be considered for.”

After hearing what Maureen had to say we started to think – what would the makeup team’s response be? They have a big job with many people’s hair and makeup to do in a very short period of time, tattoos could be stressful! But instead of getting stressed about something we know nothing about, we sought out an expert – Tamar Ouziel. 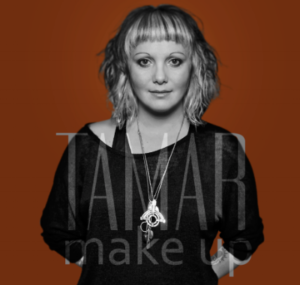 Tamar is a talented makeup artist who has been involved in the entertainment industry since she was a young child; from professional gymnastics, to musical theatre, acting, painting, sculpting, and playing music. Fifteen years ago she changed her canvas to the human face and body and she gave us a few moments of her time to answer some pressing questions about that canvas, and if it has tattoos!

Walk us through the process of covering a tattoo.

“Covering a tattoo is basic colour theory mixed with some snazzy skill. Using red or peach tones to cover the blue black, soft greens to cover reds etc. Then it depends on the ethnicity of the individual. Starting with base tones and working up. Last stage if it’s a large area of skin is adding veins or birth marks etc…”

Do you get a heads up from production if you are working with an actor with tattoos? Ever been surprised by a tattoo on an actor that you had to deal with?

“By rule, yes we are informed. But that depends how ‘on the ball’ the production is. To make sure, I usually ask, and hopefully I get an answer.”

If an actor wants to cover their own tattoo, is there a product you recommend?

“Depends how big, and how patient they are. If they have access to a pro makeup store I use Skin Illustrator and seal it with Opsite; this method is waterproof. You can also use Dermacolor by Kryolan, it’s concealer so you must powder in between each layer! As for street brands I have been told the Kat Von D ‘tattoo cover’ is really good. Just not sure on how ethnically diverse that brand is.”

Out of all the actors you see in your chair, what percentage of them would you say have tattoos? Do you find male actors have more, less or the same as female actors?

“If you asked me this question five years ago, I would have said a small percentage. And more men than women. But these days it’s pretty even. More and more women are getting small tattoos in what they feel are indiscreet places. For the most part they are, but they still need coverage. Men’s tattoos are still bigger. But at the same time are being placed more discreetly.”

Of course you’ll still find a naysayer here and there; covering tattoos takes time. Time is money. Blah Blah. But so far the word on the street is positive.

We sat down with Luvia Petersen, a successful actress (and former VADA grad) known for her roles on Continuum and Ghost Wars. Her tattoos, of which she has several, have often played a part in the roles she’s played.

Luvia, what’s your advice for actresses thinking of getting a tattoo?

“If an actress wants tattoos, I say go for it! That said, make sure you think it through! Choose wisely when deciding on the size and placement of your tattoo. When I go for auditions, I can easily show my tattoos or hide them, based on if it suites my character. Having that kind of freedom with my tattoos is fun and useful.”

How do you see tattoos shown on film in regards to male and female actors?

“I feel like men have it easier. They play their tattoos more without the need to explain some “sordid” past in the character’s life. There’s always the possibility your tattoos can type cast you… but if a production really wants to hire you because you are the right actor for the job, my opinion is they will suck it up and cover your tattoos.”

We are so glad we got the skinny on the real truth about actors and tattoos; it’s not as impossible or inconvenient as some might think. In fact, if your tattoo is really authentically part of you and your ‘hit’ or brand, it might help you get the role!