The TV & Film Production Industry in British Columbia is thriving and many Theatre actors are looking to cash in on this success. While some have been successful at doing so, others not so much. There are a number of differences between Theatre vs TV & Film acting. Here are just a few things to ponder. 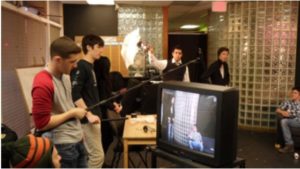 The theatre offers a wonderfully nurturing environment for training as an actor and developing your craft. Weeks (sometimes months) are spent with other cast members who often become like extended family members (and probably spend more time with you than their own). Countless hours are spent rehearsing and meeting with the Director to experiment and get the scene just right. By the time the curtain goes up on opening night, you could probably perform your role in your sleep, having rehearsed it so many times. Not so with Film and TV.

Film sets are logistical wonders, where a small army of crew can be seen purposefully walking around, setting up or breaking down equipment for the next scene. It’s controlled chaos with wranglers checking in extras/background performers, assigning call times, herding actors to and from wardrobe ensuring they don’t get lost, or worse, bother any highly–paid talent (“stars”). Meanwhile Principal and Supporting Actors spend their time preparing scenes, sitting in make up or waiting in their trailer to be called on set. It’s a hurry up and wait approach to acting and, depending on how many takes of a scene the Director wants, it can be a very long day. Working as a TV and Film actor, you will have very little (if any) rehearsal time, since you are expected to come to the set ready to perform. By the time you arrive, you’ll have researched your character and prepared your lines. You may or may not receive guidance or suggestions (that depends upon who is directing) and every Director has his or her own way of working with their actors.

As a theatre actor you (usually) work indoors on a stage with your audience just metres or hundreds of feet away. For those sitting in the back row, you have to act “big” by projecting your voice and exaggerating your facial expressions, reactions and gestures to enable them to hear and see your performance. Also, because you are performing live, an audience will notice any mistakes you make.

Crossing over to TV and Film allows you to go from acting “big” to acting “small”. You can now give a more “realistic” performance. The camera and mic eliminate any distance between a viewer and actor, so even the slightest change in facial expression (a watery eye, sideways glance, biting of the lip, etc.) is picked up to reveal emotions your character is feeling. Your aim is to make your performance as authentic as possible with your emotional reactions, body language and tone. Music or visual effects added later will serve to enhance your performance and, if you or the Director, don’t like they way the scene was done, you can do it over again (and again…).

As a stage actor, you have the thrill of performing some of the greatest plays ever written. Many of these plays are performed countless times around the world every year (and often in different languages). The scripts are all publicly available and devoted fans can often recite the entire script from memory. While you can bring your own interpretation of the character to the role, you may not deviate from the script. The audience may have pre–conceived ideas of your character, so if you stray too much from what they are expecting, you can run afoul with those who dislike change or too much interpretation. They may be waiting to hear a particular line from the play that strikes a chord with them and, if you don’t deliver it just right, they could come away feeling disappointed in your performance.

Crossing over to Film & TV offers added flexibility and the chance to give input about your character and the way YOU envision them. You may be able to make suggestions regarding your character’s disposition, mood and emotions when analyzing the script. Since most TV and Film productions are being produced for the first time (unless a remake or sequel), you won’t have the ability to draw on a past performance of the role. The audience has no preconceived ideas of what your character should look or sound like and this is very liberating, providing an opportunity to bring your artistic input for your character (e.g. walks with a limp, talks quickly or slowly, with an accent or stutter etc.). You may even be able to shape their personality by choosing to incorporate a personality tick, a character flaw or a physical imperfection. This will, of course, need to be discussed ahead of time with the Director or Screenwriter. You may even have some wiggle room to improvise dialogue in a scene, but be careful, since some Directors are less welcoming to this than others. Make sure you have a green light to do so before suggesting any changes to the script. If you feel very strongly that your character would not say or do something, you may be able to offer an alternative approach.

As a theatre actor, you understand key principals involved in movement on a stage and your training in script analysis and character building will transfer over nicely to TV and Film. However, you’ve enjoyed the luxury of performing for an audience positioned in front of you, to your right and your left. Things change a lot when working on camera.

Acting on camera offers a very different set of challenges since a Director may choose to capture a scene from any number of angles (even overhead). Aside from technical challenges of lighting and camera position, you need awareness of terminology used on set; an understanding of exactly what the camera is trying to capture; and where other actors and props are in relation to you and the camera. You need to make sure to hit your mark and, if you need to move from there, that you won’t be blocking other actors with any gestures you make (waiving, pointing, flailing your arms etc). You also need to consider how you are reacting to a person who’s speaking in the scene, since your coverage may be captured in the shot as well. If the director yells “CUT!” you must remember your last position and actions you took leading up to the stoppage, so you can continue the next shot from there. Directors may choose to shoot scenes out of order (e.g. last scenes first) or want to shoot a scene multiple times. It’s imperative that you play your character consistently between each take, emotionally and physically. Crossing over from the stage to TV and Film involves much more than just speaking naturally and not waving your hands around everywhere. You need to find an accredited TV and Film acting school with a sold reputation among Talent Agents and Casting Directors for creating industry-ready actors; being taught by industry-experienced instructors working in the industry now; taking what you already know about acting and adopting new techniques and approaches, so when you do get the chance to audition, you own the room! Break a Leg!