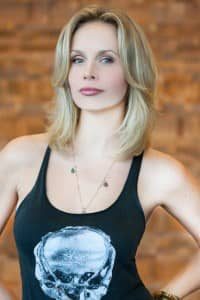 Sonya was born in Sudbury, Ontario, and grew up in Prince George, BC. She attended the University of Northern British Columbia to pursue a Bachelor of Science in Forestry, however in her last summer break she went to Victoria to sing and play guitar, and while there she became interested in acting.

Sonya attended our Audition Course and On-going Scene Study Course in 2000, soon after she appeared on screen. In 2005, she took over the role of Maya Kandinski from Carly Pope in the Canadian supernatural drama series “The Collector” and won Leo Awards two years running for Best Actress in a Supporting Role. This was followed by a season in “Durham County”, after which she received another Leo nomination for her role as Traci Prager. In 2008, Salomaa again took over a role—this time from Claudette Mink of the character Laura Nelson, a member of the coast guard in “The Guard”. She’s also guest starred in several TV shows, including “Supernatural”, “Covert Affairs” and “Flashpoint”. She was also one of the presenters for the 2010 Leo Awards.

Sonya has also performed in numerous films including the comedy, “The Tooth Fairy” , Shannen Doherty’s,“Christmas Caper “ and “Malibu Shark Attack”. She starred as a wannabe singer coming to terms with not following her dreams in the 2006 Canadian drama “Black Eyed Dog” and was the antagonist of “Ties That Bind “opposite Brian Krause and Nicole De Boer.

Here are some of Sonya’s credits. For a complete list go to Sonya Salomaa’s IMDB page.

Check out Sonya in The Space Between. Directed by Power Ranger's Amy Jo Johnson.