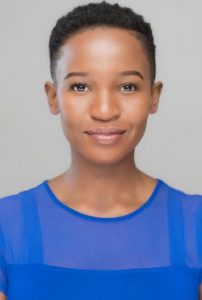 Rumbie is a Zimbabwean born actress who settled in Vancouver with her family in 2017. She grew up in Zimbabwe, Botswana and later South Africa where she began her creative life in the Fashion Industry. South African Fashion selected Rumbie as one of five up-and-coming designers from across the African continent to showcase her own fashion line, completely inspired by Marvel’s iconic Avengers characters. This was in celebration of 2015’s release of Avengers: Age of Ultron.

Inspired by this noteworthy achievement, Rumbie set her sights on some new creative goals which include Acting, Producing and Directing for Film and Television. She successfully graduated from Vancouver Academy of Dramatic Arts with a Diploma in Dramatic Arts, and distinguished herself by winning the VADA Showcase Grand Prize for Outstanding Monologue Performance; a performance which left the audience in tears.

Since then, Rumbie has landed various lead and supporting roles. One defining moment in her career was being cast on the CBC web series “Ashbridge”, which was produced and directed by Carl Bessai, who later became her mentor. This opportunity has now broadened Rumbie’s skills across a broad range of disciplines from producing, writing and acting.

Her most recent accolade was being named a “Star to Watch” at the 8th annual “Stars to Watch” program presented by UBCP/ACTRA as a result of her role as a producer and lead actress in the film “Evelyne”, which premiered at Whistler Film Festival. We can’t wait to see what she does next!