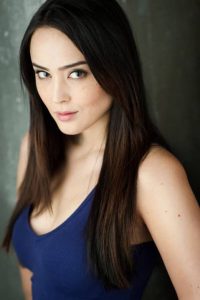 After graduating from the University of Alberta with a degree in English Literature, Beatrice completed our Dramatic Arts Program Diploma in ’07. Just six short months later, she was signed by one of the top agents in town and auditioning regularly for Film, TV, and commercials.

Her initial successes included booking commercials. This was followed by an actor role on the TV series “Blood Ties”, and a supporting role in the short film “Hookup”. She worked with Hugh Jackman on “X-Men Origins: Wolverine”, Glee Star Cory Monteith on “Sisters & Brothers” and Joseph Gordon- Levitt on “50/50”. Recently, Beatrice played the role of Queen Sindel on “Mortal Kombat: Legacy” which received international recognition. Her other credits include “Human Target”, “Supernatural” and “Psych”.

Beatrice’s thoughts on acting: “I’m all about one step at a time. I don’t expect to be an overnight success. I know I have to keep training, work hard and never get discouraged. After my agent saw me perform in the VADA Showcase, he convinced me I was ready to take the next step, so I have started going out for principal roles. I love having goals to strive for, and VADA has given me the ability to go after them.”

Here are some of Beatrice’s credits. For a complete list go to her IMDB page.

2015 So You Said Yes, The Unauthorized Melrose Place Story

Check out some of Beatrice’s work: Demo Reel