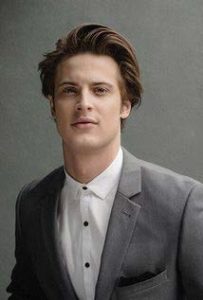 Currently seen starring on Hallmark Channel’s third season of “When Calls the Heart,” Aren Buchholz has always had a strong passion for the arts. As an extraordinarily dynamic and charismatic actor, it’s no surprise that Aren is already very accomplished despite his young age.

Born and raised in the golden prairies of Saskatchewan, Aren’s interest in performing was sparked when he took centre stage as “Scrooge” in an elementary school production of “A Christmas Carol”. That passion continued throughout high school, where he won the University of Regina Best Actor Award while in 9th grade. Aren’s other passion was hockey, playing the sport at an elite level for a number of years.

After high school, Aren had to choose between the ice and the stage, and ultimately decided to hang up the skates. He then moved to Vancouver and enrolled in our Dramatic Arts Program Diploma to pursue his career in the entertainment industry. In 2008, he landed his first professional role on a local production, Space’s “Rabbit Fall,” as a recurring guest star. Since then, Aren’s credits include a supporting lead role alongside Christian Slater in “Way of the Wicked” and guest star roles in CW’s “Supernatural” and SyFy’s “Lost Girl”. Aren also starred in “When The Ocean Met The Sky”.

Here are some of Aren’s credits. For a complete list go to his IMDB page.

Check out some of Aren’s work:

Here's Aren on Supernatural.
When the Ocean Meets the Sky